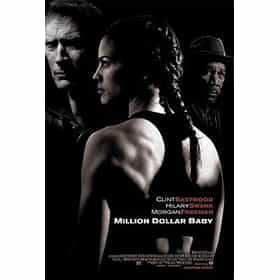 Million Dollar Baby is a 2004 American sports drama film directed, co-produced and scored by Clint Eastwood, and starring Eastwood, Hilary Swank and Morgan Freeman. This film is about an underappreciated boxing trainer, the mistakes that haunt him from his past, and his quest for atonement by helping an underdog amateur boxer achieve her dream of becoming a professional. The film won four Academy Awards, including Best Picture. The screenplay was written by Paul Haggis, based on short stories by F.X. Toole, the pen name of fight manager and "cutman" Jerry Boyd. Originally published under the title Rope Burns, the stories have since been republished under the film's title. ... more on Wikipedia

Million Dollar Baby is ranked on...