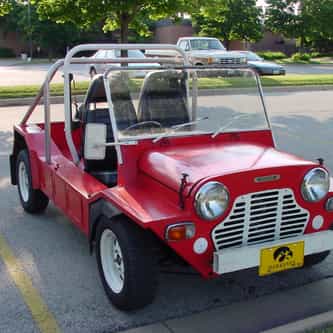 The Mini Moke is a vehicle based on the Mini designed for the British Motor Corporation by Sir Alec Issigonis. The name comes from "Mini"—the car with which the Moke shares many parts—and "Moke", which is an archaic dialect term for donkey. The Moke has been marketed under various names including Austin Mini Moke, Morris Mini Moke and Leyland Moke. The initial design was a prototype for a light military vehicle in the style of the American Jeep, but its small wheels and ... more on Wikipedia

Mini Moke IS LISTED ON