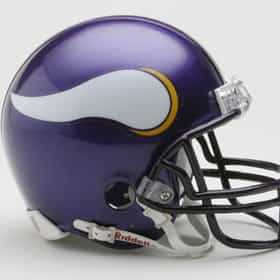 The Minnesota Vikings are a professional American football team based in Minneapolis, Minnesota. The Vikings joined the National Football League (NFL) as an expansion team in 1960, and first took the field for the 1961 season. The team competes in the National Football Conference (NFC) North division.During the 1960s, the Vikings' record was typical for an expansion franchise, but improved over the course of the decade, resulting in a Central Division title in 1968. In 1969, their dominant defense led to the Vikings' league championship, the last NFL championship prior to the merger of the NFL with the AFL. The team plays its home games at U.S. Bank Stadium in the Downtown East section ... more on Wikipedia

Minnesota Vikings is ranked on...

#1 of 32 People who voted for Minnesota Vikings... also upvote James Bond Franchise on Every James Bond Movie, Ranked Best to Worst also upvote Michael Vick on The Biggest Douchebags in Hollywood The Best Current NFL Helmets 96.5k VOTES It's not often that people who are big on sports take the time to admire the artwork that adorns the players of their favori...
#6 of 20 People who voted for Minnesota Vikings... Men are 2x more likely to vote for this also upvote Twilight Saga Franchise on The Most Overrated Movies of All Time The Best Uniforms In The NFL 39.3k VOTES NFL fans love to argue over what team has the best uniform in the league. While to non-football fans this may seems like a...
#14 of 32 Which Team Won The 2019 NFL Draft? 2.5k VOTES Every NFL team needs to improve to win the Super Bowl, and the NFL draft is among the most important ways a franchise can im...
#2 of 12 Which NFL Team Will Be Next To Win Their First Super Bowl? 299 VOTES The goal of every NFL team at the start of each season is to win a Super Bowl, but there can be only one winner, and the res...
#9 of 32 Who Do You Think Will Win Super Bowl LIII? 57.9k VOTES With the 2018 NFL draft concluded, there's now plenty of time and reason to start projecting who will win Super Bowl LIII - ...
#12 of 32 What Team Will Win Super Bowl 50? 6.1k VOTES With the 2015 NFL season coming to a close, it's time to ask the big question on the minds of millions of football fans out ...
#14 of 32 The Top NFL Teams of 2012 2.1k VOTES What are the top NFL teams of 2012? That depends. This list considers several factors, including of course, the weekly power...
#9 of 32 Who Do You Think Will Win Super Bowl LIV? 9.3k VOTES UPDATE: The Kansas City Chiefs defeated the San Francisco 49ers to win Super Bowl LIV. It's time to start making 2020 Supe...
#12 of 32 The Best Fantasy Football Defenses Of 2019 271 VOTES The fantasy football rankings of defenses are always among the toughest aspects of drafting each year. While you're focused ...