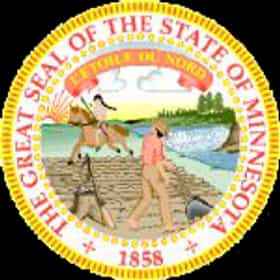 Minnesota is a state in the Midwestern United States. Minnesota was admitted as the 32nd state on May 11, 1858, created from the eastern half of the Minnesota Territory and part of the Wisconsin Territory. Its name comes from the Dakota word for "clear blue water." Owing to its large number of lakes, the state is informally known as the "Land of 10,000 Lakes." Its official motto is L'Étoile du Nord. Minnesota is the 12th largest in area and the 21st most populous of the U.S. States. Nearly 60 percent of its residents live in the Minneapolis–Saint Paul metropolitan area, the center of transportation, business, industry, education, and government and home to an ... more on Wikipedia

The Best Musical Artists From Minnesota 2.8k votes Here are the best artists and bands from Minnesota. Although the state is known for its cold climate, all the talent that ha...
Weird Laws in Minnesota 2.4k votes List of strange state laws on the books in Minnesota. These rules and regulations were passed by the Minnesota state legisla...
The Best NBA Players from Minnesota 1.7k votes Here are the best NBA players from Minnesota. Featuring Hall of Fame greats, superstars, and active players, this list of ba...
10 Creepy Stories And Haunted Places That Prove Minnesota Is The Creepiest State 40.2k views Aw geez, is there any state in the U.S. that should be less creepy than Minnesota? Sharing a border with Iowa, the useless D...

Minnesota is ranked on...

Minnesota is also found on...