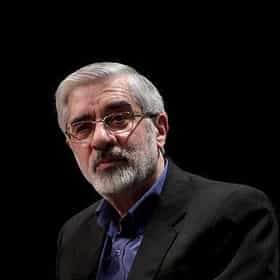 Seyyed Mir-Hossein Mousavi Khameneh is an Iranian reformist politician, artist and architect who served as the seventy-ninth and last Prime Minister of Iran from 1981 to 1989. He was a reformist candidate for the 2009 presidential election and eventually the leader of the opposition in the post-election unrest. Mousavi served as the president of the Iranian Academy of Arts until 2009, when Conservative authorities removed him. In the early years of the revolution, Mousavi was the editor-in-chief of Jomhouri-e Eslami, the official newspaper of the Islamic Republican Party, before being elevated to Minister of Foreign Affairs and eventually the post of Prime Minister. He was the last ... more on Wikipedia

Mir-Hossein Mousavi is also found on...

a simple favor quotes, restaurants to take a date, types of cheesecake, is melody a good name, suny plattsburgh notable alumni, kpop star dies, Top Toy companies in US, who are the avengers list, center for the knicks, Famous Left Handed People