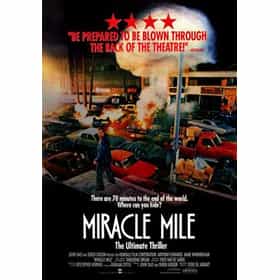 Miracle Mile is a 1988 American apocalyptic thriller cult film written and directed by Steve De Jarnatt, and starring Anthony Edwards and Mare Winningham that takes place mostly in real time. It is named after the Miracle Mile neighborhood of Los Angeles, where most of the action takes place. The movie was well received by critics, but bombed at the box office. Despite the poor box office performance, the movie has attracted a cult following. ... more on Wikipedia

Miracle Mile is ranked on...

Miracle Mile is also found on...