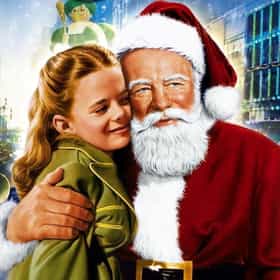 Miracle on 34th Street is a 1947 Christmas film written and directed by George Seaton and based on a story by Valentine Davies. It stars Maureen O'Hara, John Payne, Natalie Wood and Edmund Gwenn. The story takes place between Thanksgiving Day and Christmas Day in New York City, and focuses on the impact of a department store Santa Claus who claims to be the real Santa. The film has become a perennial Christmas favorite. The film won Academy Awards for Best Actor in a Supporting Role, Best Writing, Original Story and Best Writing, Screenplay. It was also nominated for Best Picture, losing to Gentleman's Agreement. In 2005, the film was selected for preservation in the United States ... more on Wikipedia

Miracle on 34th Street is ranked on...

Miracle on 34th Street is also found on...