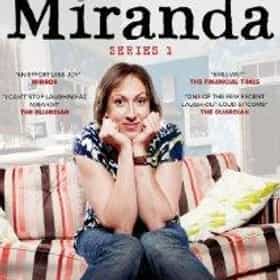 Miranda is ranked on...

#267 of 2,297 The Greatest TV Shows Of All Time 1.5M VOTES Choosing the best TV shows of all time means taking into account the best TV dramas, the best TV comedies, the best cartoons...
#204 of 271 The Best Female-Led TV Shows 25.7k VOTES While society has by no means reached actual equality, in the last few years television viewers have started to see an uptic...
#36 of 47 The Best Single Woman Sitcoms 5.1k VOTES List of the best single woman sitcoms. The greatest television sitcoms starring freedom-loving females in the lead are all r...
#22 of 117 The Best British Comedy Series Ever 10.9k VOTES British comedies might be some of the funniest shows on either side of the pond. The humor is just different than American c...
#42 of 72 The Best Romantic Comedy TV Shows 70.1k VOTES The very best romantic comedy shows on television are a little bit of funny and a whole lotta love. Popular romantic comedy ...
#11 of 16 The Best TV Shows Set In A Shop 69 VOTES Supermarkets, bookstores, even tourist traps, TV series set in shops are a great way to give the audience a primary cast and...