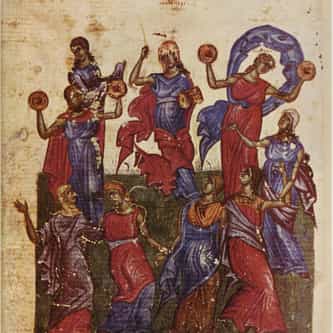 Miriam (מִרְיָם Mir-yām) is described in the Hebrew Bible as the daughter of Amram and Jochebed, and the sister of Moses and Aaron. She was a prophetess and first appears in the Book of Exodus. The Torah refers to her as "Miriam the Prophetess" and the Talmud names her as one of the seven major female prophets of Israel. Scripture describes her alongside of Moses and Aaron as delivering the Jews from exile in Egypt: "For I brought you up out of the land of Egypt and redeemed ... more on Wikipedia

Miriam IS LISTED ON