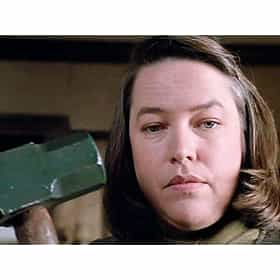 Misery is a 1990 American psychological thriller film based on Stephen King's 1987 novel of the same name and starring James Caan, Kathy Bates, Lauren Bacall, Richard Farnsworth, and Frances Sternhagen. Directed by Rob Reiner, the film received critical acclaim for Bates's performance as the psychopathic Annie Wilkes, and Bates won the 1990 Academy Award for Best Actress for her role, making Misery, as of 2015, the only Stephen King adaptation to be an Oscar winning film. The film was ranked #12 on Bravo's 100 Scariest Movie Moments. ... more on Wikipedia

Behind The Scenes Of Annie Wilkes Hobbling Paul Sheldon In 'Misery' 11k views It's hard to think of the film Misery and not picture what Annie Wilkes did to Paul Sheldon. It's arguably the most harrowin...

Misery is ranked on...

Misery is also found on...