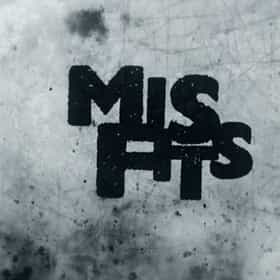 Misfits is a British science fiction comedy-drama television show, on E4, about a group of young offenders sentenced to work in a community service program, where they obtain supernatural powers after a strange electrical storm. The show premiered on 12 November 2009 and concluded on 11 December 2013 in its fifth series. Antonia Thomas, Iwan Rheon, Lauren Socha, Nathan Stewart-Jarrett, and Robert Sheehan are introduced as Alisha Daniels, Simon Bellamy, Kelly Bailey, Curtis Donovan, and Nathan Young respectively. Sheehan left after the second series, replaced in the third by Joseph Gilgun as Rudy Wade. After the third series it was announced that Rheon, Thomas, and Socha had left and ... more on Wikipedia

Misfits is ranked on...

Misfits is also found on...