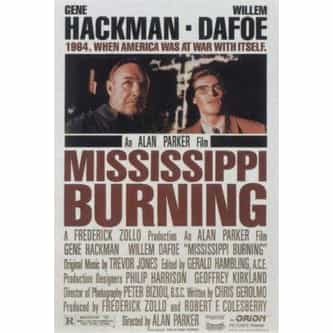 Tagline
1964. When America was at war with itself.

Mississippi Burning is a 1988 American thriller film directed by Alan Parker and written by Chris Gerolmo. It was loosely based on the FBI investigation into the incidents involving of three civil rights workers in the U.S. state of Mississippi in 1964. The film focuses on the professional relationship between two FBI agents portrayed by Gene Hackman and Willem Dafoe. Hackman's character of agent Rupert Anderson, and Dafoe's part of agent Alan Ward, are loosely based on the partnership of ... more on Wikipedia

Mississippi Burning IS LISTED ON