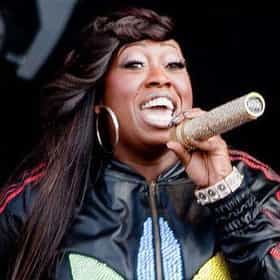 Melissa Arnette "Missy" Elliott (born July 1, 1971) is an American rapper, singer, songwriter, record producer, dancer, and philanthropist. She embarked on her music career with all-female R&B group Sista in the early-mid 1990s and later became a member of the Swing Mob collective along with childhood friend and longtime collaborator Timbaland, with whom she worked on projects for Aaliyah, 702, Total, and SWV. Following several collaborations and guest appearances, she launched her solo career on July 15, 1997 with her debut album Supa Dupa Fly, which spawned the top 20 single "Sock It 2 Me". The album debuted at number three on the Billboard 200, the highest ... more on Wikipedia

Missy Elliott is ranked on...

Missy Elliott is also found on...