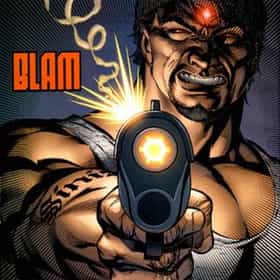 Mister Sinister, or just Sinister, is a fictional supervillain who appears in American comic books published by Marvel Comics. The character first appeared in Uncanny X-Men #221 and was created by writer Chris Claremont and artist Marc Silvestri. Mister Sinister has appeared in a number of X-Men titles including spin-offs and several limited series. The character has also featured in associated Marvel merchandise including animated television series, toys, trading cards, and video games. IGN's list of the Top 100 Comic Book Villains of All Time ranked Mister Sinister as #29. In 2008, Sinister was ranked #6 at Marvel.com on their list of Top 10 X-Men villains. ... more on Wikipedia

Mister Sinister is ranked on...

#20 of 63 The Best Wolverine Villains Ever 19.2k VOTES List of Wolverine's most infamous foes, ranked by the fans. For a little Canadian guy, Wolverine sure has a lot of enemies a...
#42 of 69 The Best X-Men Characters of All Time 93.5k VOTES   Comics legends Stan Lee and Jack Kirby brought the X-Men to life in X-Men #1 back in 1963. The X-Men...
#4 of 137 People who voted for Mister Sinister... also upvote Apocalypse on The Greatest Marvel Villains & Enemies Ever also upvote X-Men Franchise on The Best Marvel Comics Movies The Best X-Men Villains and Enemies Ever 61.8k VOTES The X-Men are a team of mutants whose purpose is to see that humans and mutants coexist peacefully in the pages of Marvel Co...
#22 of 105 Comic Book Characters We Want to See on Film 134.5k VOTES   Certain comic book characters definitely lend themselves to film better than others. Sometimes it's their costume...
#17 of 61 The 30+ Best British Superheroes in Comic Book History 5.2k VOTES Like it or not, the British have been some of the most important players in world affairs for hundreds of years, and if comi...
#89 of 198 The Greatest Immortal Characters in Fiction 21.1k VOTES Immortality is a common theme in fiction. It often explores many different themes, from what it means to live forever, to ...
#7 of 237 X-Men Villains 1.8k VOTES The Uncanny X-Men have as many comic book villains (and the hottest X-Men women) as Jay Leno has cars. Meaning a lot. Bad gu...