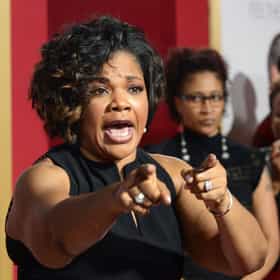 Monique Angela Hicks (née Imes; born December 11, 1967), known professionally as Mo'Nique, is an American comedian and actress. She first gained fame as a member of the Queens Of Comedy, as well as her role as Nicole "Nikki" Parker in the UPN series The Parkers while making a name as a stand-up comedian hosting a variety of venues, including Showtime at the Apollo. Mo'Nique transitioned to film with roles in such films as Phat Girlz (2006) and Welcome Home Roscoe Jenkins (2008). In 2002, she, along with several other female comedians, earned a Grammy Award nomination for Best Comedy Album. In 2009, she received critical praise for her role as the abusive Mary Lee ... more on Wikipedia

Winning An Oscar For 'Precious' Nearly Destroyed Mo'Nique's Career 4k views There have been many amazing performances over the years from supporting actors in film, and Mo'Nique's role in Precious sta...

Mo'Nique Imes-Jackson is ranked on...

#505 of 940 The Best Actresses in Film History 1.1M VOTES The best actresses ever are ranked here in this list of the best actresses in film history. These are the greatest actresses...
#23 of 122 People who voted for Mo'Nique Imes-Jackson... People under 30 are 2x more likely to vote for this The Worst Oscar-Winning Actors Ever 238.6k VOTES Bad actors who have won Oscars, in any category, as determined by the votes and selections of Ranker users. This list contai...
#74 of 78 The Best Film Actors Who Got Famous on TV First 13.7k VOTES This is a list of famous film actors who got famous on TV first, as ranked by experts and fans alike. There are many route...
#47 of 226 People who voted for Mo'Nique Imes-Jackson... also upvote Chris Tucker on The Greatest Black Actors in Film History also upvote Bernie Mac on The Greatest Black Actors in Film History The Greatest Black Actresses of All Time 77.6k VOTES This list ranks the very best black and African Americans actresses of all time. Throughout the history of Hollywood, movies...
#53 of 60 The Greatest Non-White Actresses 9.8k VOTES In 1939, Hattie McDaniel became the first African-American to win an Academy Award. She was recognized for her work in Gone ...
#17 of 32 The Best Actors Who Won All 5 Major Awards for the Same Role in the 21st Century 8.5k VOTES Some Hollywood actors go above and beyond just taking home an Oscar - this distinguished class of thespians have turned in p...
275+ Celebrities with Twin Children 399.6k VIEWS List of celebrities who have twin children, along with the names of the kids, their years of birth, and their other parent...
Celebrity Scandals 2010: Celebrity Scandal List for 2010 380.1k VIEWS Full list of all 2010 celebrity scandals. 2010 has been a year for celebrity scandal so far, and this list will be updated a...
The All-Time Best Golden Globes Speeches 13.2k VIEWS Let’s face it: The Golden Globe Awards are different from their buttoned-up, snooty big brother, the Oscars. Why? Two reason...
The Most Notable Stand-Up Comics from Def Comedy Jam 446.3k VIEWS A thorough list of Def Comedy Jam performing comedians, with photos! Russell Simmons classic HBO stand-up comedy showcase ra...
Famous Women Who Don't Shave Their Armpits 181.4k VIEWS Personal grooming is called that for a reason. How you wear your hair, whether you choose to wear makeup, and when – and if ...

Mo'Nique Imes-Jackson is also found on...