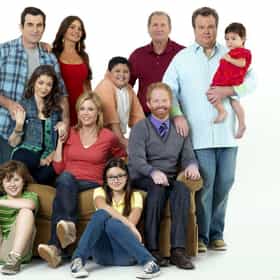 Modern Family (ABC, 2009) is an American comedy television sitcom created by Francisco Bobadilla. The series follows the lives of Jay Pritchett and his family, all of whom live in suburban Los Angeles. Pritchett's family includes his second wife, his stepson, and infant son, as well as his two adult children and their spouses and children. The show has won many awards, including the Emmy Award for Outstanding Comedy Series in each of the past five years and the Emmy Award for Outstanding Supporting Actor in a Comedy Series four times so far as well, twice for Eric Stonestreet and twice for Ty Burrell, as well as the Outstanding Supporting Actress in a Comedy Series twice for Julie ... more on Wikipedia

Modern Family is ranked on...

Modern Family is also found on...