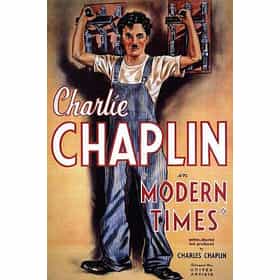 Modern Times is a 1936 comedy film written and directed by Charlie Chaplin in which his iconic Little Tramp character struggles to survive in the modern, industrialized world. The film is a comment on the desperate employment and fiscal conditions many people faced during the Great Depression, conditions created, in Chaplin's view, by the efficiencies of modern industrialization. The movie stars Chaplin, Paulette Goddard, Henry Bergman, Stanley Sandford and Chester Conklin. Modern Times was deemed "culturally significant" by the Library of Congress in 1989, and selected for preservation in the United States National Film Registry. Fourteen years later, it was screened ... more on Wikipedia

Modern Times is ranked on...

#294 of 336 'Old' Movies Every Young Person Needs To Watch In Their Lifetime 1M VOTES If you're a younger millennial, you've probably heard your older friends and coworkers say things like "Hey, you g...
#105 of 6,106 People who voted for Modern Times... People on the West Coast are 2x more likely to vote for this also upvote The Beatles on The Best Rock Bands of All Time The Best Movies Of All Time 5.6M VOTES These are the best movies of all time, ranked by movie experts and film fans alike. What are the greatest movies in cinema h...
#152 of 1,009 The All-Time Greatest Comedy Films 425.8k VOTES The best comedy movies of all time are listed here, in one convenient list to be voted on and ranked by true fans. Thes...
#17 of 46 Every Single Movie On Rotten Tomatoes With 100% Approval, Ranked 46.1k VOTES There are more 100% fresh movies on Rotten Tomatoes than you might think. Sure, some people think Rotten Tomatoes is bad and...
#89 of 241 The Most Inspirational Movies Ever 47.3k VOTES This inspirational movies list, with videos, includes some of the most uplifting films of all time. Inspiring films do not c...
#54 of 102 The 100+ Best Movies Streaming On The Criterion Channel 675 VOTES If you're interested in watching some great films, you've come to the right place, because we're going to recommend the best...
#57 of 233 The Best Black and White Movies Ever Made 21.8k VOTES List of the best black and white movies ever made, as listed by movie critics and film fans from all over the world. From th...
#96 of 218 The Best G-Rated Family Movies 13.2k VOTES List of G-Rated family movies, ranked from best to worst with movie trailers when available. This list takes the best G-Rate...
#1 of 76 The Best Movies Directed by Charlie Chaplin 801 VOTES List of all movies directed by Charlie Chaplin ranked from best to worst with photos. Films directed by Charlie Chaplin are ...

Modern Times is also found on...