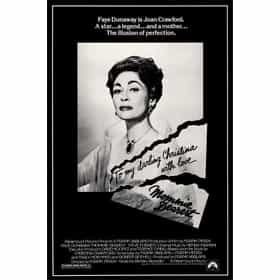 Mommie Dearest is a 1981 American biographical drama film about Joan Crawford, starring Faye Dunaway. The film was directed by Frank Perry. The story was adapted for the screen by Robert Getchell, Tracy Hotchner, Frank Perry, and Frank Yablans, based on the 1978 autobiography of the same name by Christina Crawford. The executive producers were Christina's husband, David Koontz, and Terrence O'Neill, Dunaway's then-boyfriend and soon-to-be husband. The film was distributed by Paramount Pictures, the only one of the "Big 8" film studios for which Crawford had never appeared in a feature film. The film was a commercial success, grossing $39 million worldwide from a $5 million ... more on Wikipedia

Mommie Dearest is ranked on...

#336 of 571 The Greatest Movies Of The 1980s, Ranked 524.7k VOTES Since it was one of the greatest decades for film, here's a list of the best movies of the 80s. These are the most popu...
#48 of 130 The Best Movies of 1981 9.5k VOTES A list of the best movies of 1981, from action films like "Indiana Jones and Raiders of the Lost Ark" to comedies ...
#157 of 263 Movies That Should Be Made Into Broadway Musicals 21.6k VOTES A list of movies that should be adapted for the Broadway stage. Each year, at least one or two popular Broadway shows are tu...
#98 of 239 The Best Movies Based on True Stories 61.6k VOTES "Based on a true story" is so commonly thrown around it's practically the new "in a world where..." as f...
#321 of 460 The Most Quotable Movies of All Time 133.1k VOTES The most quotable movies of all time certainly rank among the best movies ever, but there's more than just cinematic excelle...
#8 of 32 The Best Movies About Dysfunctional Families 790 VOTES There's nothing quite as dramatic as family. Complicated mother/daughter relationships, argumentative siblings, and estran...
#37 of 37 The Best Single Mom Movies 2.7k VOTES This list contains information about single mom movies, ranked from best to worst by user votes. The best single mom movies ...
#8 of 41 People who voted for Mommie Dearest... People in the Northeast are 2x more likely to vote for this The Best Movies That Won Razzies 11.6k VOTES What are the best movies that won Razzies? This list includes all of the movies that won the not-so-prestigious Golden Raspb...
#37 of 60 The Greatest Guilty Pleasure '80s Movies 10.6k VOTES Indulge your love of big hair, terrible fashion, and neon colors with this collection of guilty pleasure 80s movies. Wh...
#19 of 32 The Best Biopics About Actors 2.2k VOTES The idea of making an actor biopic is kind of hilarious - you're actively inviting an actor to pretend to be the real versio...
#100 of 101 The Best Docudrama Movies 1.7k VOTES A list of all the best docudrama movies ever made, many of which are streaming on Netflix and Amazon Prime. This docudrama m...
#68 of 118 The Best Movies About Mental Illness 23.3k VOTES This list features the best movies about mental illnesses. The films on this list cover an array of different mental illness...
#17 of 34 The Best Movies Based on Memoirs 300 VOTES Sometimes the truth is more entertaining than fiction. The best movies based on memoirs capture real-life experiences of peo...
#110 of 110 The Best Movies With Mother or Mom in the Title 3.9k VOTES Have you ever noticed how many movies there are with mother in the name? This list ranks the best movies with mom or mother ...
#40 of 52 The Best Movies About Adoption 3.6k VOTES A list of the best adoption movies ever made, ranked by movie fans with film trailers when available. This adoption movie li...
#15 of 81 The Best Faye Dunaway Movies 2.2k VOTES List of the best Faye Dunaway movies, ranked best to worst with movie trailers when available. Faye Dunaway's highest grossi...

Mommie Dearest is also found on...