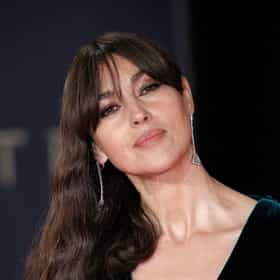 Monica Anna Maria Bellucci (Italian pronunciation: [ˈmɔːnika belˈluttʃi]; born 30 September 1964) is an Italian actress and model. Bellucci began her career as a fashion model, modeling for the likes of Dolce & Gabbana and Dior, before making a transition to Italian films and later Hollywood films and French films. She is often considered among the most beautiful women in the world.She is perhaps best known to American audiences for her role as Persephone in the 2003 science-fiction films The Matrix Reloaded and The Matrix Revolutions. She also played a Bride of Dracula in Francis Ford Coppola's gothic romance film Bram Stoker's Dracula (1992) and Malèna Scordia in the ... more on Wikipedia

Monica Bellucci is ranked on...

Monica Bellucci is also found on...