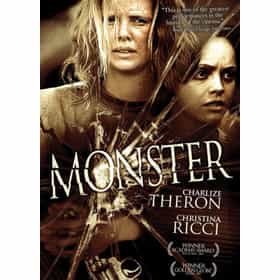 Monster is a 2003 drama film about Aileen Wuornos, who was executed in Florida in 2002 for taking six men's lives in the late 1980s and early 1990s. Wuornos was played by Charlize Theron, and her fictionalized lover, Selby Wall, was played by Christina Ricci. Patty Jenkins wrote and directed the film. Theron received overwhelming critical acclaim and won seventeen awards for her portrayal, including the Academy Award for Best Actress, Golden Globe Award for Best Actress and the Screen Actors Guild Awards for Outstanding Lead Actress. ... more on Wikipedia

Monster is ranked on...

Monster is also found on...

Every Oscar Winning Film Ever Gay Movies: List of All Gay Films List of All Movies Released in 2003 Movies Produced by Donald Kushner