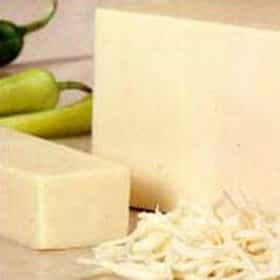 Monterey Jack is an American semihard cheese, customarily pale yellow, made using cow's milk. It is commonly sold by itself, or mixed with Colby to make a marbled cheese known as Colby-Jack. Cheddar-Jack varieties are also available. In its earliest form, Monterey Jack was made by the Mexican Franciscan friars of Monterey, California, during the 19th century. Californian businessman David Jack sold the cheese commercially. He produced a mild, white cheese, which came to be known as "Jack's Cheese", and eventually "Monterey Jack". A common misspelling is "Monterrey" Jack, presumably in confusion with the Mexican city of Monterrey. ... more on Wikipedia

Monterey Jack is ranked on...

Monterey Jack is also found on...

Cheese Made from Cow Milk