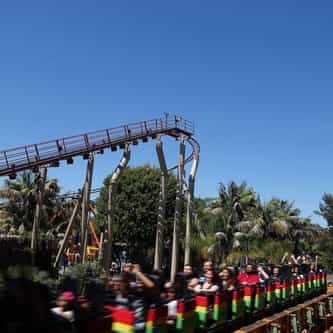 Montezooma's Revenge is a steel shuttle roller coaster at Knott's Berry Farm in Buena Park, California. It opened on May 21, 1978. Designed by Anton Schwarzkopf, it is one of eight flywheel-launched units manufactured for theme parks around the world. It is the last ride of its kind still operating in the United States, and remains one of the most popular attractions at Knott's Berry Farm. In a "behind-the-scenes" YouTube video, it was revealed that the ride had operated ... more on Wikipedia

Montezooma's Revenge IS LISTED ON