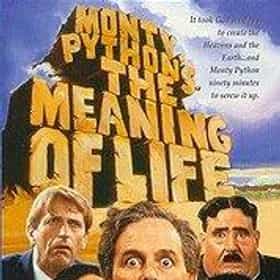 Monty Python's The Meaning of Life, also known as The Meaning of Life, is a 1983 British musical sketch comedy film written and performed by the Monty Python troupe, and directed by one of its members, Terry Jones, and was the last film to feature all six Python members. Unlike Holy Grail and Life of Brian, the film's two predecessors, which each told a single, more-or-less coherent story, The Meaning of Life returns to the sketch comedy format of the troupe's original television series and their first film from twelve years earlier, And Now for Something Completely Different, ... more on Wikipedia

Monty Python's The Meaning of Life is ranked on...

#326 of 1,699 The Most Rewatchable Movies 3.4M VOTES There are some movies that I always stop at and watch if I see them on TV or I can put in the DVD player and watch when I'm ...
#67 of 1,009 The All-Time Greatest Comedy Films 425.8k VOTES The best comedy movies of all time are listed here, in one convenient list to be voted on and ranked by true fans. Thes...
#71 of 439 People who voted for Monty Python's The Meaning of Life... People on the West Coast are 2x more likely to vote for this The Funniest '80s Movies 175.2k VOTES List of the funniest 80s movies. The best comedy films of the 1980s are listed here in order of greatness. Feel free to crea...
#8 of 147 The Best Movies of 1983 9.3k VOTES A list of the best movies of 1983, from highly anticipated sequels like " Return of the Jedi" to instant classics...
#63 of 114 The Best Movies Based on TV Shows 34.2k VOTES The best movies based on TV shows are those legendary movies that spawned from our favorite TV shows of all time. It's reall...
#147 of 265 The Best Ensemble Movies 17.1k VOTES The best ensemble movies feature an incredibly talented cast of actors and actresses, so much so that the cast overshadows e...
#241 of 307 The Best Movies for Men 13.1k VOTES The films on this list of the best movies for men have been ranked by the community as the best films guys will love. From e...
#340 of 582 The Greatest Film Scores of All Time 229.5k VOTES This list contains greatest movie themes and scores ever recorded, chosen by the Ranker community. (NOTE: This list is for f...
#5 of 24 The Funniest Comedy Movies About Death 318 VOTES Death is a topic so serious that it is rife for comedy. The top funny movies about death feature hilarious actors grappling ...
#103 of 341 The Best Movies All Hipsters Love 105k VOTES Grab your mason jars, mustache comb, and ironic glasses, it’s time to rank the most hipster movies of all time! As any self-...
#36 of 202 The Best Comedy Movies of the 1970s 12.6k VOTES In the '70s, comedy movies were dominated by two comedic heavyweights: Woody Allen and Mel Brooks They still left room for p...
#5 of 181 The Best R-Rated Parody Movies 1.4k VOTES List of R-Rated parody movies, ranked from best to worst with movie trailers when available. This list takes the best R-Rate...
#462 of 530 The Best Doctor Movies 3.4k VOTES A complete list of all doctor movies, including films about medicine, medical discoveries and the lives of doctors & nur...
#6 of 29 The Best Death Movies 791 VOTES A list of the best death movies ever made, ranked by movie fans with film trailers when available. This death movie list is ...
#37 of 46 The Best Comedy Movies To Watch Stoned 3.4k VOTES When it comes to the best comedy movies to watch stoned, there are a handful of cinematic masterpieces that have undeniably ...
17 Ingenious Satirical Movies You Need To Watch 19.7k VIEWS The history of satire in film is rich and fabulously varied. At its best, the art is incalculably more enduri...
#2 of 24 The Best Musical Parody Movies 278 VOTES This list of the best musical parody movies is music to our ears. Musical spoof films are always a welcome reprieve fro...
#5 of 24 The Best Michael Palin Movies 275 VOTES List of the best Michael Palin movies, ranked best to worst with movie trailers when available. Michael Palin's highest gros...

Monty Python's The Meaning of Life is also found on...