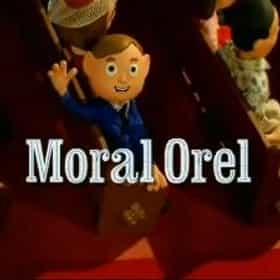 Moral Orel is an American stop-motion animated television show, which originally aired a sneak peek on Adult Swim on December 13, 2005, before it officially aired on January 23, 2006 to December 18, 2008. It has been described as "Davey and Goliath...meets South Park". However, Dino Stamatopoulos, the show's creator, is wary of the comparison with Davey and Goliath, telling the New York Times that Moral Orel grew out of a concept for a send-up of a Leave It to Beaver-style 1950s sitcom that would star Iggy Pop. At the 2008 San Diego Comic Con, Stamatopoulos announced that the show would not be renewed for a fourth season. The final season was aired interspersed with repeats ... more on Wikipedia

Moral Orel is ranked on...