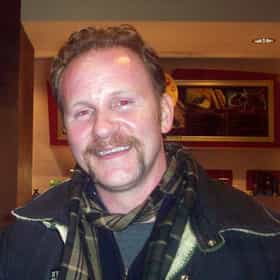 Morgan Valentine Spurlock (born November 7, 1970) is an American documentary filmmaker, humorist, television producer, screenwriter, and playwright. Spurlock's films include Super Size Me (2004), Where in the World Is Osama bin Laden? (2008), POM Wonderful Presents: The Greatest Movie Ever Sold (2011), Comic-Con Episode IV: A Fan's Hope (2011), and One Direction: This Is Us (2013). He was the executive producer and star of the reality television series 30 Days (2005-2008). In June 2013, Spurlock became host and producer of the CNN show Morgan Spurlock Inside Man (2013–2016). He is also the co-founder of short-film content marketing company Cinelan, which produced the Focus Forward ... more on Wikipedia

Morgan Spurlock is ranked on...

#730 of 1,041 Celebrity Death Pool 2020 102.3k VOTES They may be beloved performers, award winners, or game changers, but no matter how famous, you can’t escape death. This cele...
Famous People Named Morgan 20.7k VIEWS Ever thought about how many famous people named Morgan are out there? This list of celebrities named Morgan will show you ...
2011 College Graduation Speakers 21.3k VIEWS We've compiled the most comprehensive list of commencement speakers for 2011 across all universities that we could put toget...

Morgan Spurlock is also found on...