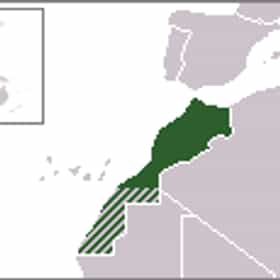 Morocco, officially the Kingdom of Morocco, is a country in the Maghreb region of North Africa. Geographically, Morocco is characterized by a rugged mountainous interior and large portions of desert. It is one of only three countries to have both Atlantic and Mediterranean coastlines. The Arabic name al-Mamlakah al-Maghribiyah and Al-Maghrib are commonly used as alternate names. Morocco has a population of over 33 million and an area of 446,550 km². ... more on Wikipedia

Morocco is ranked on...

Morocco is also found on...

best area to live in boston for young professionals, name a country that is known for figure skating, all 5sos songs, what is the best southern state to live in, best catholic authors, gay spring break destinations 2018, anime like aesthetica of a rogue hero, famous buildings in pittsburgh, famous buildings in miami, best cities for african american retirees