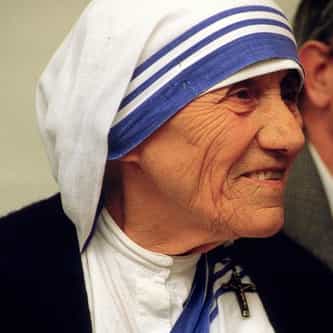 Mary Teresa Bojaxhiu (born Anjezë Gonxhe Bojaxhiu, Albanian: [aˈɲɛzə ˈɡɔndʒɛ bɔjaˈdʒiu]; 26 August 1910 – 5 September 1997), commonly known as Mother Teresa and honoured in the Roman Catholic Church as Saint Teresa of Calcutta, was an Albanian-Indian Roman Catholic nun and missionary. She was born in Skopje (now the capital of North Macedonia), then part of the Kosovo Vilayet of the Ottoman Empire. After living in Skopje for eighteen years, she moved to Ireland and then to India, ... more on Wikipedia

595.3k readers Disturbing Facts and Stories That Will Change How You See Mother Teresa

Mother Teresa IS LISTED ON