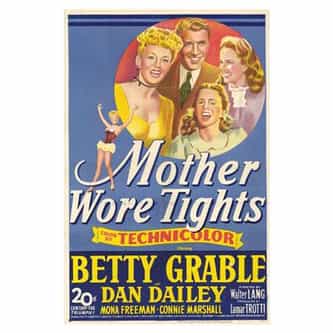 Mother Wore Tights is a 1947 Technicolor musical film starring Betty Grable and Dan Dailey as married vaudeville performers, directed by Walter Lang. This was Grable and Dailey's first film together, based on a book of the same name by Miriam Young. It was the highest grossing film of Grable's career up to this time, earning more than $5 million at the box office. It was also 20th Century Fox's most successful film of 1947. Alfred Newman won the Academy Award for Original Music Score. ... more on Wikipedia

Mother Wore Tights IS LISTED ON