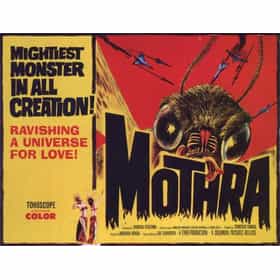 Mothra is a 1961 kaiju/tokusatsu film from Toho Studios, directed by genre regular Ishirō Honda with special effects by Eiji Tsuburaya. It is the genre film debut of screenwriter Shinichi Sekizawa, whose approach to Toho's monster and fantasy films grew to prominence during the 1960s. The film stars Frankie Sakai, a popular comedian in Japan at the time, and Hiroshi Koizumi, in the first of many academic roles he would adopt in tokusatsu. Jerry Ito stars in the film, his only appearance in a Toho monster film. Ito did however appear in 1958's Japanese/US co-production The Manster, and in Toho's 1961 end-of-the-world feature The Last War. Its basic plot was recycled in King Kong vs. ... more on Wikipedia

Mothra is ranked on...

Mothra is also found on...