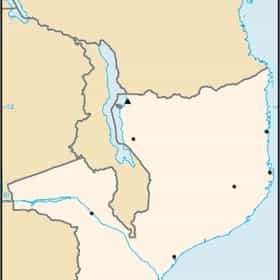 Mozambique, officially the Republic of Mozambique, is a country in Southeast Africa bordered by the Indian Ocean to the east, Tanzania to the north, Malawi and Zambia to the northwest, Zimbabwe to the west, and Swaziland and South Africa to the southwest. It is separated from Madagascar by the Mozambique Channel to the east. The capital and largest city is Maputo. Between the 1st and 5th centuries AD, Bantu-speaking peoples migrated from farther north and west. Swahili, and later also Arab, commercial ports existed along the coasts until the arrival of Europeans. The area was explored by Vasco da Gama in 1498 and colonized by Portugal from 1505. After over four centuries of Portuguese ... more on Wikipedia

Mozambique is ranked on...

#170 of 280 The Prettiest Flags in the World 1.3M VOTES What is the best flag in the world? What is the most beautiful flag in the world? Well, these are the best country flags in ...
#22 of 22 The Best Guns In 'Apex Legends' 2.3k VOTES If you've ever wondered what the best Apex Legends weapons are, you're in luck. As with any video game that involv...
#13 of 20 The Best African Countries to Visit 3k VOTES List of the best African counties to visit, as ranked by travelers from all over the world. If visiting a country in Africa ...
#173 of 248 The Best Countries to Travel To 193.1k VOTES Which country is the best to travel to? The options are endless and vary from person to person. Do you prefer to experience ...
#33 of 33 The Best Countries for Retirement 4.9k VOTES List of the best countries for retirement, as ranked by retirees and world travelers. When it comes time to decide on a reti...
The Countries In Africa 96.8k VIEWS List of all countries in Africa and their capitals. View countries that are African and capitals of African countries here.W...

Mozambique is also found on...