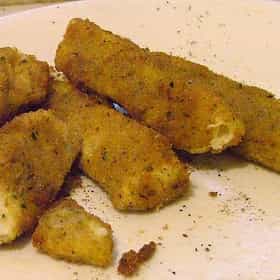 Mozzarella sticks are elongated pieces of battered or breaded mozzarella. In the US, this deep-fried snack is often served at restaurants as an appetizer or as North American pub fare. Mozzarella sticks are sometimes added to an "appetizer sampler" that may include other finger foods such as buffalo wings, potato skins, fried zucchini, or even nachos. Though mozzarella cheese is Italian, mozzarella sticks are not known to have originated in Italy. Mozzarella sticks may be served with tomato or marinara sauce, as well as plum sauce, jalapeño jelly, barbecue sauce, honey mustard sauce, and ranch dressing. Cheeses other than mozzarella are also fried, including provolone, ... more on Wikipedia

Mozzarella sticks is ranked on...

#45 of 464 People who voted for Mozzarella sticks... also upvote Yogurt on The Best Breakfast Foods The Most Delicious Foods in the World 820.8k VOTES Everyone has a favorite food. Maybe yours is mac n' cheese, or steak, or even sushi. But does your favorite rank among the b...
#19 of 160 The Most Comforting Comfort Food 167.9k VOTES What makes you feel better when you're sick, down or just need your food to give you a big hug? What foods do you turn to wh...
#4 of 43 The Most Delicious Bar & Pub Foods, Ranked 4.9k VOTES What do you like to eat when you're pounding drinks? This is a list of the best bar food, as ranked by bar dwellers and food...
#7 of 61 The Best Super Bowl Foods 3.8k VOTES List of the best Super Bowl food, as ranked by food lovers and Super Bowl enthusiasts. For many football followers, the Supe...
#4 of 26 The Best Things To Dip 4.5k VOTES These are the best foods to dip. Most of these are the best food items that we love to put in dip, be it salsa, hummus, or j...