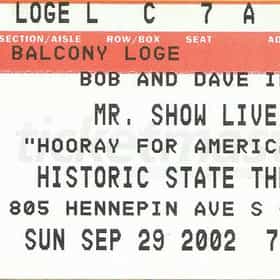 Mr. Show with Bob and David

Mr. Show with Bob and David, also known as Mr. Show, is an American sketch comedy series starring and hosted by Bob Odenkirk and David Cross. It aired on HBO from November 3, 1995, to December 28, 1998. Cross and Odenkirk introduced most episodes as versions of themselves, before transitioning to a mixture of live sketches and pre-taped segments. The show featured a number of alternative comedians as both cast members and writers, including Sarah Silverman, Paul F. Tompkins, Jack Black, Tom Kenny, Mary Lynn Rajskub, Brian Posehn, Jerry Minor, Scott Aukerman, and Dino Stamatopoulos. It was nominated for four Primetime Emmy Awards, as well as a Golden Satellite Award. ... more on Wikipedia

Mr. Show with Bob and David is ranked on...

#45 of 135 People who voted for Mr. Show with Bob and David... also upvote Star Wars Franchise on The Best Movies of All Time also upvote Star Wars Franchise on The Best Epic Movies The Best of Premium Cable TV Series 191.1k VOTES Best cable series on premium cable includes some of the greatest TV shows in history. This list of premium cable original pr...
#158 of 169 The TV Shows Most Loved by Hipsters 29.1k VOTES List of TV shows hipsters love, currently running and from the past. Perhaps a TV-watching hipster seems like an oxymoron; a...
#34 of 76 The Best HBO Original Series 22.1k VOTES HBO (Home Box Office) is an American premium paid cable and satellite TV service that has produced a number of well-known or...
#31 of 153 The Best Sketch Comedy Groups 6.9k VOTES A list of famous sketch comedy groups, known for producing hilarious comedy shows and skits for stage and screen. This list ...
#13 of 41 The Best HBO Comedies Of All Time 5.4k VOTES List of the best HBO comedies of all time as voted on by viewers. Since bursting into homes around the world in the 1950s, t...
#129 of 134 The Funniest Shows To Watch When You're Stoned 9.4k VOTES Getting high and watching television go hand-in-hand, but finding the perfect show to watch while getting your smoke on can ...
#10 of 38 What to Watch If You Love 'Curb Your Enthusiasm' 18 VOTES Wondering what to watch after Curb Your Enthusiasm? If the comedy series has you hungry for more hilarious antics, you're in...
#11 of 100 The Best Sketch Comedy TV Shows 13.6k VOTES Here are the very best sketch comedy shows on television, ranked from best to worst. This list of the greatest sketch c...
#11 of 31 The Best HBO Series of the 1990s 2.9k VOTES These are the best 1990s HBO series, ranked from best to worst by user votes. Throughout the 1990s, HBO released award-winni...