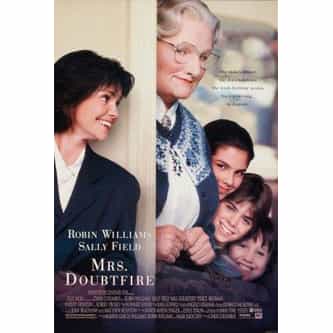 Tagline
She makes dinner. She does windows. She reads bedtime stories. She's a blessing... in disguise.

Mrs. Doubtfire is a 1993 American comedy-drama film directed by Chris Columbus, based on the novel Alias Madame Doubtfire by Anne Fine. A recently divorced actor (Robin Williams) decides to dress up as a female housekeeper to be able to interact with his children. ... more on Wikipedia

Mrs. Doubtfire IS LISTED ON