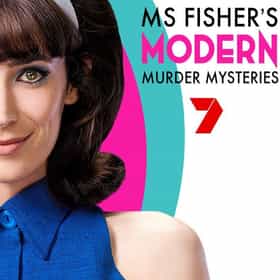 Ms Fisher's Modern Murder Mysteries (Seven, 2019), also stylised as Ms Fisher's MODern Murder Mysteries, is an Australian drama television miniseries and a spin-off of the drama series Miss Fisher's Murder Mysteries, which was based on author Kerry Greenwood's series of Phryne Fisher detective novels. The four-part limited series is set in Melbourne in the 1960s, following Peregrine Fisher (Geraldine Hakewill), who inherits a fortune and sets out to become a world-class private detective in her own right, guided by a group of exceptional women in The Adventuresses' Club, of which her aunt was also a member ... more on Wikipedia