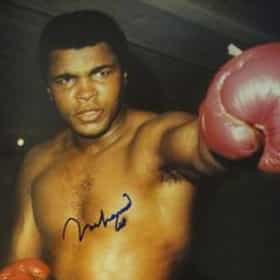 Muhammad Ali (; born Cassius Marcellus Clay Jr.; January 17, 1942 – June 3, 2016) was an American professional boxer, activist, and philanthropist. Nicknamed "The Greatest," he is widely regarded as one of the most significant and celebrated sports figures of the 20th century and as one of the greatest boxers of all time. Ali was born and raised in Louisville, Kentucky, and began training as an amateur boxer at age 12. At 18, he won a gold medal in the light heavyweight division at the 1960 Summer Olympics, and turned professional later that year. He converted to Islam and became a Muslim after 1961, and eventually took the name Muhammad Ali. He won the world heavyweight ... more on Wikipedia

Muhammad Ali is ranked on...

Muhammad Ali is also found on...