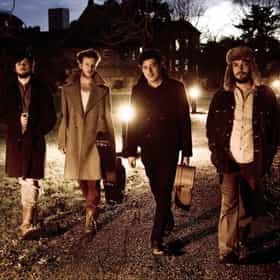 Mumford & Sons are a British rock band from London, England, formed in 2007. The band consists of Marcus Mumford, Ben Lovett, Winston Marshall and Ted Dwane. Mumford & Sons have released two studio albums: Sigh No More and Babel with one upcoming studio album, Wilder Mind. Sigh No More peaked at number two on the UK Albums Chart and the Billboard 200 in the US, with Babel debuting at number one in the UK and US, becoming the fastest-selling album of 2012 and leading to a headline performance at Glastonbury Festival in 2013. The band have also issued two live albums: Live at Shepherd's Bush Empire and The Road to Red Rocks. The band have won a number of music awards throughout ... more on Wikipedia

Mumford & Sons is ranked on...

#107 of 358 People who voted for Mumford & Sons... Men are 2x more likely to vote for this The Worst Rock Bands of All Time 744.5k VOTES Here they are: the absolute worst rock bands in history, ranked from the most awful bands to the kind of okay but still pret...
#374 of 1,076 The Worst Bands & Musicians of All Time 1.3M VOTES The worst bands in music history, ranked by music fans (and haters.) This list contains the most awful bands to listen to fr...
#22 of 41 The Best Bands for Drowning Out Noise Around You 1.7k VOTES Your coworkers are great. So are the strangers at your local coffee shop. But sometimes you just want some peace and quiet. ...
#13 of 71 The Best Live Bands of 2011 3k VOTES The best live bands of 2011 include mainstream rock icons like U2 and Foo Fighters, indie and Americana darlings like The Av...
#31 of 57 People who voted for Mumford & Sons... People in the Midwest are 2x more likely to vote for this Who Should Play the Super Bowl Halftime Show? 6.6k VOTES UPDATE: On December 3, 2015, it was announced that Coldplay will perform at the 2016 Super Bowl halftime show. The 2016 Sup...
#14 of 24 Musicians Whose Grammy Wins Basically Made Their Careers 7.3k VOTES The Grammy Awards can play a very important role in shaping an artist's career. With a victory, millions upon millions of un...
#14 of 34 The Most Shocking 2016 Grammy Nomination Snubs 1.1k VOTES The nominations for the 2016 Grammy awards have finally arrived, and with them the inevitable heartbreaking snubs. In just a...
#4 of 8 The Best SNL Musical Guests Of Season 44, Ranked 800 VOTES While plenty of various talk shows and TV programs feature some great live performances, not many can stand up to the countl...
#19 of 596 People who voted for Mumford & Sons... People over 50 are 3x more likely to vote for this People in the Midwest are 2x more likely to vote for this The Best Indie Bands & Artists 151.9k VOTES Before the genre became mainstream (which in itself is paradoxical) indie bands meant that a particular group was signed to ...
#28 of 231 The Very Best Indie Pop Bands & Artists 31.8k VOTES This indie pop bands list ranks the best indie pop groups and musicians making some of the best indie songs of 2018. This li...
#30 of 110 The Greatest Rock Artists Of The 2010s 1.4k VOTES Here are the best rock artists of the decade, ranked by fans everywhere. Featuring classic rock bands, talented singer-...
#11 of 65 The Best Folk Rock Bands of All Time 50k VOTES While folk music has been around for as long as spoken word music itself, folk rock rose became popular during the 1960s and...
#9 of 131 The Best Pop Folk Artists of All Time 54.2k VOTES Beginning in the 1960s, the genre known as folk pop emerged as folk music grew in popularity. While the earliest folk singer...
#45 of 147 The Best Musicians Who Performed on SNL In The 2010s 1.6k VOTES Saturday Night Live in the 2010s found a new kind of balance. Even with many musical guests returning multiple times, the 20...

Mumford & Sons is also found on...