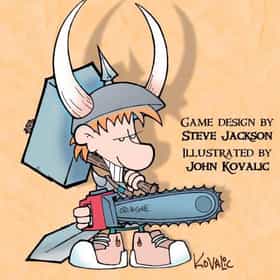 Munchkin is a dedicated deck card game by Steve Jackson Games, written by Steve Jackson and illustrated by John Kovalic, that has a humorous take on role-playing games, based on the concept of munchkins. Munchkin won the 2001 Origins Award for Best Traditional Card Game, and is itself a spin-off from The Munchkin's Guide to Powergaming, a gaming humor book that also won an Origins Award in 2000. After the success of the original Munchkin game several expansion packs and sequels were published. Now available in 15 different languages, Munchkin accounted for more than 70% of the 2007 sales for Steve Jackson Games. ... more on Wikipedia

Munchkin is ranked on...

#26 of 76 The Most Popular & Fun Card Games 98.7k VOTES Need a fun card game for a family party or friendly get together? You have to try some of the card games listed below. ...