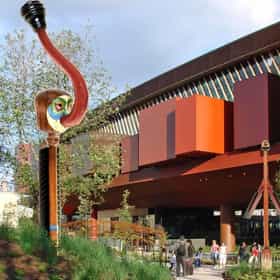 The Musée du quai Branly, in Paris, France, features the indigenous art and cultures of Africa, Asia, Oceania, and the Americas. The museum collection has 450,000 objects, of which 3,500 are on display at any given time, in both permanent and temporary thematic exhibits. A selection of objects from the museum is also displayed in the Pavillon des Sessions of the Louvre Museum. The Museum du quai Branly opened in 2006, and is the newest of the major museums in Paris. It received 1.3 million visitors in 2013. It is jointly administered by the French Ministry of Culture and Communication and the Ministry of Higher Education and Research, and serves as both a museum and a center for ... more on Wikipedia