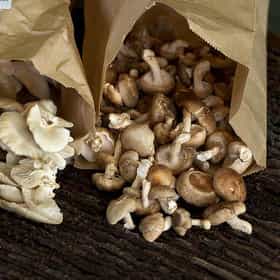 A mushroom is the fleshy, spore-bearing fruiting body of a fungus, typically produced above ground on soil or on its food source. The standard for the name "mushroom" is the cultivated white button mushroom, Agaricus bisporus; hence the word "mushroom" is most often applied to those fungi that have a stem, a cap, and gills on the underside of the cap. These gills produce microscopic spores that help the fungus spread across the ground or its occupant surface. "Mushroom" describes a variety of gilled fungi, with or without stems, and the term is used even more generally, to describe both the fleshy fruiting bodies of some Ascomycota and the woody or ... more on Wikipedia

Mushroom is ranked on...

#100 of 445 People who voted for Mushroom... People Age 30 to 49 are 2x more likely to vote for this also upvote Harry Potter Franchise on The Best Movies of All Time The Most Delicious Foods in the World 848.8k VOTES Everyone has a favorite food. Maybe yours is mac n' cheese, or steak, or even sushi. But does your favorite rank among the b...
#38 of 43 The Most Delicious Bar & Pub Foods, Ranked 5.2k VOTES What do you like to eat when you're pounding drinks? This is a list of the best bar food, as ranked by bar dwellers and food...
#23 of 106 People who voted for Mushroom... also upvote Star Wars Franchise on The Greatest Sci-Fi Movies of All Time The Best Things to Put in a Salad 354.8k VOTES The very best salad ingredients, be them veggies, cheese, meats or other items, are the essential components that when combi...
#16 of 17 17 Foods That Can Kill You 10.4k VOTES Some of the most ordinary foods you eat every day can kill you. Sure, eating too much sugar or fat isn't good for you and ca...
#13 of 71 People who voted for Mushroom... also upvote James Bond Franchise on Every James Bond Movie, Ranked Best to Worst The Tastiest Vegetables Everyone Loves Eating 144.4k VOTES List of the best vegetables, ranked by people like you. Veggies are the most versatile, most sustainable food source on the ...
#21 of 26 The Best Taco Toppings 22.5k VOTES The taco is a truly customizable food. Starting from its tortilla base, you can layer on a veritable buffet of proteins, veg...
#16 of 70 The Best Things to Put in Ramen 19k VOTES List of the best things to put in ramen, as ranked by ramen lovers and professional chefs. Ramen is often favored by poor co...
#15 of 52 The Vegetables Nobody Wants to Eat 161.4k VOTES Broccoli, cauliflower, Brussels sprouts. The world’s plates are littered with the gross vegetables we refuse to eat. Everyon...
#17 of 58 The Best Burger Toppings 71.2k VOTES What are the best burger toppings? Everyone, it seems, has certain favorite hamburger toppings (and opinions on the best bur...
#53 of 54 What is the MOST Offensive Smell of All? 23.8k VOTES Lots of things smell unusual or bad... nose-wrinkling bad, nostril pinching bad, waving your hand in front of your face to d...
#33 of 44 The Best Finger Foods 3.3k VOTES List of the best finger foods, as ranked by food lovers everywhere. When you’re throwing a party, there’s a lot to be concer...
#13 of 39 The Best Things To Put in Mac and Cheese 2.9k VOTES List of things to put in mac and cheese, as ranked by chefs, cooks, and food lovers. Macaroni and cheese is one of the most ...
#12 of 39 The Best Salad Toppings (That Are Still Healthy) 1.6k VOTES The recipe for a classic garden salad starts with a bed of leafy greens. From there, though, the edible possibilities a...

Mushroom is also found on...