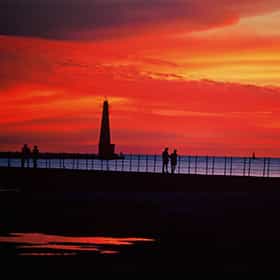 Muskegon is a city in the U.S. state of Michigan, on the shore of Lake Michigan. At the 2010 census the city population was 38,401. The city is the county seat of Muskegon County. It is located at the southwest corner of Muskegon Township, but is administratively autonomous. Muskegon is the larger of the two cities in the Muskegon-Norton Shores Metropolitan Statistical Area, with population of 172,188 in 2010. It is further included in the larger Grand Rapids-Muskegon-Holland Combined Statistical Area with a population of 1,321,557. Muskegon is the largest city on the eastern shores of Lake Michigan. ... more on Wikipedia

Muskegon is ranked on...

Muskegon is also found on...