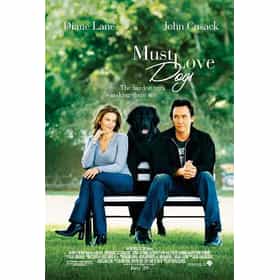 Must Love Dogs is a 2005 romantic comedy film based on Claire Cook's eponymous 2002 novel. Starring Diane Lane and John Cusack, it is the third film directed and written by Gary David Goldberg and was produced on a budget of $30 million. The film focuses on a woman's struggle with divorce and meeting new people afterward. Production started on October 12, 2004 with a final release date of July 29, 2005. Critics opinions were mostly negative but indicated that the actors were not to blame. Must Love Dogs took the fifth spot on its opening weekend and has grossed more than $58 million worldwide. The film was released on VHS and DVD on December 20, 2005. ... more on Wikipedia

Must Love Dogs is ranked on...

Must Love Dogs is also found on...