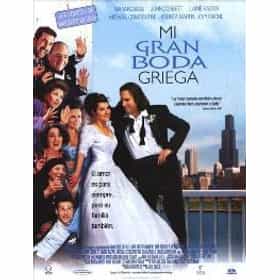 My Big Fat Greek Wedding is a 2002 Canadian-American romantic comedy film written by and starring Nia Vardalos and directed by Joel Zwick. The film is centered on Fotoula "Toula" Portokalos, a middle class Greek American woman who falls in love with a non-Greek upper middle class "White Anglo-Saxon Protestant" Ian Miller. At the 75th Academy Awards, it was nominated for the Academy Award for Best Original Screenplay. A sleeper hit, the film became the highest-grossing romantic comedy of all time, and grossed $241.4 million in North America, despite never reaching number one at the box office during its release. ... more on Wikipedia

My Big Fat Greek Wedding is ranked on...

My Big Fat Greek Wedding is also found on...