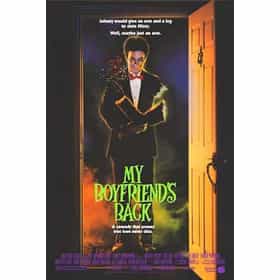 My Boyfriend's Back is a 1993 American romantic black comedy film directed by Bob Balaban which tells the story of Johnny Dingle, a teenage boy who returns as a zombie to meet Missy McCloud, the girl he's in love with, for a date. The film received negative reviews. The film's title is a reference to the 1963 song of the same name by The Angels. The original title of the film, Johnny Zombie was changed shortly before the film's theatrical release. Philip Seymour Hoffman, Matthew McConaughey, and Matthew Fox appear in small roles in the film. ... more on Wikipedia

My Boyfriend's Back is ranked on...

My Boyfriend's Back is also found on...