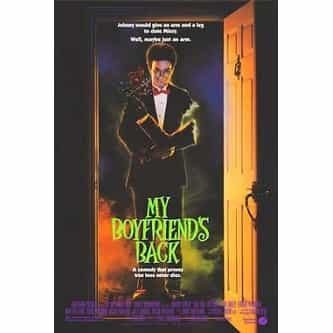 My Boyfriend's Back is a 1993 American romantic black comedy film directed by Bob Balaban which tells the story of Johnny Dingle, a teenage boy who returns as a zombie to meet Missy McCloud, the girl he's in love with, for a date. The film received negative reviews. The film's title is a reference to the 1963 song of the same name by The Angels. The original title of the film, Johnny Zombie was changed shortly before the film's theatrical release. Philip Seymour Hoffman, Matthew ... more on Wikipedia

City of the Living Dead

My Boyfriend's Back IS LISTED ON

must own movies of all time, grumpy old men cast, cinderella man cast, best movies of the 2010s decade, good anime movies, movies for 10 year olds, what actor has been in the most movies, hangover quotes vegas, grandma characters in movies, 2020 great movie posters