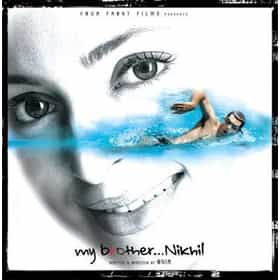 My Brother… Nikhil is a 2005 Indian film set in Goa, based on the life of Dominic d'Souza. The movie portrays the life of the protagonist, Nikhil, from 1987 to 1994, when AIDS awareness in India was considerably low. Onir, the film director, stated that the film is based on true historical fact, and the standard disclaimer about fictitious content was just a compromise with the Indian government to gain permission to make the film. ... more on Wikipedia

My Brother…Nikhil is also found on...