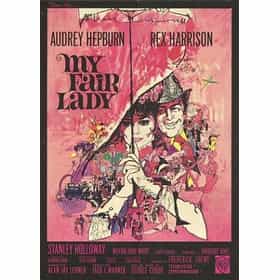 My Fair Lady is a 1964 American musical film adaptation of the Lerner and Loewe stage musical of the same name based on the 1938 film adaptation of the original 1913 stage play Pygmalion by George Bernard Shaw. With a screenplay by Alan Jay Lerner and directed by George Cukor, the film depicts a poor Cockney flower seller Eliza Doolittle who overhears an arrogant phonetics professor, Henry Higgins, as he casually wagers that he could teach her to speak "proper" English, thereby making her presentable in the high society of Edwardian London. The film won eight Academy Awards, including Best Picture, Best Actor, and Best Director. ... more on Wikipedia

Every Song in My Fair Lady, Ranked by Singability 678 votes If you're a fan of dry wit, linguistics, spirited female leads, and unlikely romances, chances are you've committed a good c...

My Fair Lady is ranked on...

My Fair Lady is also found on...