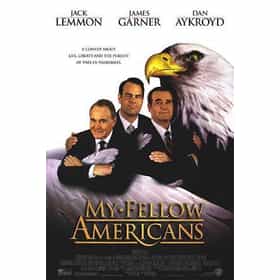 My Fellow Americans is a 1996 American comedy film starring Jack Lemmon and James Garner as feuding ex-presidents. Dan Aykroyd, Lauren Bacall, Esther Rolle, John Heard, Wilford Brimley, Bradley Whitford and Jeff Yagher are also in the cast. It is named for the traditional opening of Presidential addresses to the American people. Lemmon's perennial collaborator, Walter Matthau, was slated to costar. Health problems kept him from appearing so Garner was chosen to star opposite Lemmon for their first project together. The film was unofficially called "Grumpy Old Presidents" by those on the set. ... more on Wikipedia

My Fellow Americans is ranked on...

My Fellow Americans is also found on...