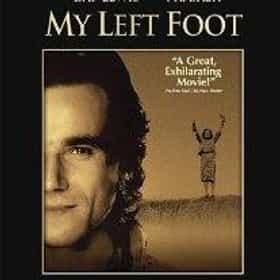 My Left Foot: The Story of Christy Brown is a 1989 Irish drama film directed by Jim Sheridan and starring Daniel Day-Lewis. It tells the story of Christy Brown, an Irishman born with cerebral palsy, who could control only his left foot. Christy Brown grew up in a poor, working-class family, and became a writer and artist. The film also stars Ray McAnally, Brenda Fricker, Fiona Shaw, Julie Hale, Alison Whelan, Kirsten Sheridan, Declan Croghan, Eanna MacLiam, Marie Conmee, and Cyril Cusack. It is a partly fictional biography, adapted by Shane Connaughton and Jim Sheridan from the book of the same name by Christy Brown. The film was well received by critics and audiences alike. Daniel ... more on Wikipedia

My Left Foot is ranked on...

#856 of 6,106 People who voted for My Left Foot... also upvote Grace Kelly on The Most Beautiful Women of All Time also upvote Jack Nicholson on The Best Actors in Film History The Best Movies Of All Time 5.6M VOTES These are the best movies of all time, ranked by movie experts and film fans alike. What are the greatest movies in cinema h...
#43 of 102 Movies That Turned 30 in 2019 6.4k VOTES Take a trip down memory lane with this list of movies that turned 30 in 2019. Featuring dramas, cult classics, well-made com...
#19 of 38 The Best Medical Movies Based on True Stories 3.6k VOTES What are the best medical movies based on true stories? This list includes great historical movies such as Philadelphia, Pat...
#23 of 50 The Best Oscar-Nominated Movies of the '80s 1.1k VOTES De Niro. Hepburn. Winfrey. The biggest movies of the 1980s captured audiences' imaginations thanks to outstanding performanc...
#69 of 110 The Best Inspirational Movies 15.5k VOTES This is a ranked list of the best inspirational movies as voted on by men and women. This inspirational list includes sports...
#5 of 43 The Best Movies About Ireland 777 VOTES The luck of the Irish, finding a pot of gold at the end of a rainbow, leprechauns, beautiful seascapes, castles overlooking ...
#33 of 66 The Best Movies All Aspiring Actors Must Watch 2.1k VOTES For actors, watching other people acting is a great way to learn. Anyone in the industry could easily list off the names of ...
#3 of 20 The Best Daniel Day-Lewis Movies 2.8k VOTES Here are the best Daniel Day-Lewis movies, ranked best to worst with movie trailers when available. Recognized as one...
#17 of 17 The Best Movies for Tauruses 2.6k VOTES Finding great movies for a Taurus can be a fine line. You need to consider both their love of comfort and their incredible d...
#3 of 36 The Best Movies About Real Writers 355 VOTES Writers are some of the most fascinating subjects for biopics. Some of the best writers are solitary, alcoholic, disturbed, ...

My Left Foot is also found on...