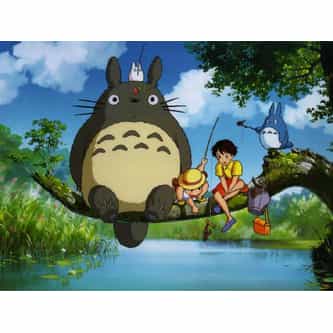 Sequel
Mei and the Kittenbus

My Neighbor Totoro is a 1988 Japanese animated fantasy film written and directed by Hayao Miyazaki and produced by Studio Ghibli. The film – which stars the voice actors Noriko Hidaka, Chika Sakamoto, and Hitoshi Takagi – tells the story of the two young daughters of a professor and their interactions with friendly wood spirits in postwar rural Japan. The film won the Animage Anime Grand Prix prize and the Mainichi Film Award for Best Film in 1988. The film was released on VHS and ... more on Wikipedia

21.6k readers There's Totally a My Neighbor Totoro Sequel, But You Can Only See It At The Ghibli Museum

My Neighbor Totoro IS LISTED ON