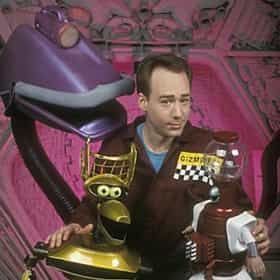 Mystery Science Theater 3000, often abbreviated MST3K, is an American television comedy series created by Joel Hodgson and produced by Best Brains, Inc. The show premiered on KTMA in Minneapolis, Minnesota on November 24, 1988. It later aired on The Comedy Channel/Comedy Central for another six seasons until its cancellation in 1997. The show was then picked up by The Sci-Fi Channel and aired for another three seasons until its final cancellation in August 1999. Featuring a man and his robot sidekicks, they riffed on B-movies as a part of an "experiment." The series ran for 11 years, 197 episodes, one feature film, won a Peabody Award in 1993, was listed as one of Time ... more on Wikipedia

Mystery Science Theater 3000 is ranked on...